Haven’t we been hearing or a long time that that human innovation and technology will be the thing that gets us through the projected crisis’ ahead, from the environmental, to the social and political. Yet even as we are seeing an unprecedented increase in affordable technologies, these solutions still tend to consolidate power in the hands of a few as most are proprietary by design.

Wasn’t it Wendell Berry that said a solution is not a solution if it is not available to all? It’s a rational that resonates with a lot of the opensource and farmhack ethos of simple, user designed, accessible technologies and practices. Because beyond just being accessible, open source innovations respond to the needs of a community rather than being prescriptive solutions coming from outside.

We’re excited about this little project by some folks from France called The Gold of Bengal. The group has been sailing a boat made of recycled material, navigating the the world in search of different interesting initiatives. Their current voyage began in 2015 and for the next 3 years they are documenting low-technology innovations that they encounter along the way.

You can find out more info about the Nomade des Mers voyage here and look at some of their low-tech lab documentation here. And while you’re feeling inspired maybe you want to contribute some of your own low tech solutions to the farmhack tool list.

Farmer, tool hacker, organizer, and self styled agricultural anthropologist (and, we’re proud to say, a GH blog editor) Samuel Oslund takes us on a journey into les Rencontres de l’Atelier Paysan. Les Rencontres is a yearly gathering of farmers from across France, hosted by our French farm hacking heroes  l’Atelier Paysan (roughly The Peasant’s/agrarian Workshop).  The event is a hands on skill sharing celebration, filled with food, good wine, and some fairly strange music. END_OF_DOCUMENT_TOKEN_TO_BE_REPLACED 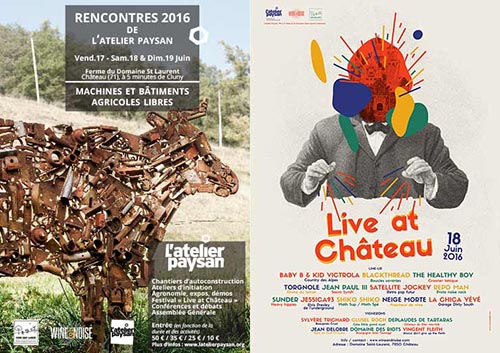 You will have the opportunity to take part in a wealth of activities: introductory sessions to metal work, talks, workshops, conferences, etc. In this form you can tell us the activities that interest you the most, and help us to put together a programme that suits your needs!
In order to keep things simple, we advise you to tick “Definitely” for:
– the ongoing workshop which you are most interested in
– a maximum of 2 introductory workshops
The aim is not only to tell us what you’re interested in, but also what you feel you will be able to do, without trying to cram in too much.

To take a look and to book,  click HERE!

We are a French-speaking collective of small-scale farmers, employees and agricultural development organisations, gathered together as a cooperative named l’Atelier Paysan. Based on the principle that farmers are themselves innovators, we have been collaboratively developing methods and practices to reclaim farming skills and achieve self-sufficiency in relation to the tools and machinery used in organic farming. In 2011, we set ourselves up as a staffed organisation working to promote farm-based inventions, collectively develop new technological solutions adapted to small-scale farming, and make these skills and ideas widely available through courses and educational materials. Since 2015, we have also been offering resources and guidance to farmer-driven projects involving the building or renovation of agricultural buildings.

We are based in the Rhône-Alpes region of south east France and also have a branch in Brittany. We have three trucks equipped with the machinery and materials we need to run practical training courses on farms and workshops across France. We provide advice and guidance for small-scale farmers on agricultural tools tailored to their needs, and accompany them through their trials and tribulations in their farming journey, individually or collectively, whatever their area of production. The development of tools and self-built machinery adapted to small-scale farming is a technological, economic and cultural instrument which has been little explored within agricultural development in France, although it can provide a significant impact on the growth of organic farming and contribute to improving organic farming practices.

Check them out, because they just translated their website into English!

I don’t know about you, but the list of words that I can actually read is French is pretty short, spans the length of soufflé to the lyrics of “Lady Marmalade.” So, when I look at this website, I can just barely string enough cognates and context clues together to glean the most basic and yet exciting fact: there will be a Farm Hack event in France June 17th-19th!

But that’s really neither here nor there. The point is, there’s a farm hack in FRANCE. And we think that’s pretty freaking great. Maybe you read French. Maybe you live in France. Maybe you can glean more information from this than I can.

Atelier Paysan is a French cooperative of small-scale farmers, engineers and agricultural development organisations. Together, we develop methods and practices to reclaim farming skills and achieve self-sufficiency in relation to the tools and machinery used in organic farming.

END_OF_DOCUMENT_TOKEN_TO_BE_REPLACED

“My apologies to the Parisians,” said Sebastien Louzaouen, a member of the Young Farmers’ Union in France, “but the farmers are coming.”

The warning comes as an estimated 1,700 tractors and thousands of agricultural workers from across the country rolled into downtown Paris on Thursday – part of a growing protest movement led by unionized  small- and medium-scale farmers who say they are on the verge of bankruptcy due to drops in food prices, an export glut, and the encroaching threat of factory farms.

“It will create some discomfort for the Parisians,” acknowledged Xavier Beulin, president of the FNSEA, the nation’s largest farmers union and organizer of the protest, during a radio interview on Wednesday.  Apologizing for the disruption in advance, Beulin said the dramatic show of force from the farmers was necessary in order to “show the government that there is a great determination, great suffering, and great exasperation” on the part of the nation’s struggling food producers.

According to the French Agricultural Ministry, an estimated 10 percent of farms in France—approximately 22,000 sites—are on the brink of bankruptcy with a combined debt of one billion euros. Click HERE to read more!

France to force big supermarkets to give unsold food to charities
By Angelique Chrisafis, The Guardian, May 22, 2015

French supermarkets will be banned from throwing away or destroying unsold food and must instead donate it to charities or for animal feed, under a law set to crack down on food waste.

The French national assembly voted unanimously to pass the legislation as France battles an epidemic of wasted food that has highlighted the divide between giant food firms and people who are struggling to eat.

As MPs united in a rare cross-party consensus, the centre-right deputy Yves Jégo told parliament: “There’s an absolute urgency – charities are desperate for food. The most moving part of this law is that it opens us up to others who are suffering.”

Supermarkets will be barred from deliberately spoiling unsold food so it cannot be eaten. Those with a footprint of 4,305 sq ft (400 sq m) or more will have to sign contracts with charities by July next year or face penalties including fines of up to €75,000 (£53,000) or two years in jail.

OuiShare Fest is an annual event uniting the global collaborative economy community for three days of conference, co-creating and connecting. The 2015 edition will take place at the Cabaret Sauvage, Paris, from May 20-22. Severine of the Greenhorns will be there to represent Farm Hack. Say hello if you are at the event!

Another food travel show?! Yes. But this time, it’s different. Really. Taste Hunters: Les Explorateurs du Gout is a new travel show from France, whose chef travelers seek “food rebels and good food” and farmers who produce “closer to nature.” Perhaps some members of the Greenhorns readership will find their way on to this program!

Taste Hunters promotional photo. Photo subject is a cheese maker at Mull Farm in the U.K., which you can learn more about here: https://www.facebook.com/isleofmullcheese

Even if you can’t watch Food Hunters as broadcast television, you can view some of their videos and follow them online via:

A French organic winegrower who refused to spray his Burgundy vineyard with pesticide was ordered on Monday to pay a €500 fine for flouting official regulations.

The winegrower, Emmanuel Giboulot, had faced a possible six month jail sentence and €30,000 fine for refusing to spray his chardonnay and pinot noir grapes against an insect blamed for spreading a lethal disease known as flavescence dorée. It is attacking the vineyards of the Côte-d’Or region, where Giboulot produces côte de beaune and haute-côte de nuits wines.

Scores of Giboulot’s supporters, including Green MEP Sandrine Bélier, had gathered outside the court in Dijon to hear the verdict. The judge ruled in line with the prosecution’s demand that he should receive a fine of €1,000, with €500 suspended. Giboulot, 51, announced that he would appeal, and said after the hearing: “I still don’t feel guilty. It’s intolerable today to be forced to hide and to be frightened for taking a stand.” To read more, click HERE

After Winter, Spring is a new documentary film directed by Judith Lit, an intimate portrait of an acestral way of life under threat in a world increasingly dominated by industrial agriculture.

Learn more about the film, how you can see it, and how to schedule your own screening HERE.

If you can read French, this is a great resource from the folks at L’Atelier Paysan.  If French looks like gobbledygook to you, this website is still worth an exploration (read: random clicking) because what they are doing is awesome. Check it out HERE! (Hint: “outils” means “tools” in French).