The theme of the upcoming 37th annual E.F. Schumacher Lectures, taking place on November 4th, is “Choosing the Path that is Green”,  a reference to the prophecy of the Anishinaabe peoples. Winona LaDuke, who is a member of the Anishinaabe is this years keynote speaker. La Duke is an activist, community economist and author and her work has always been in alignment with the work of the Schumacher Center and of Greenhorns. She has been a persistent advocate for community land stewardship, local food sovereignty and sustainable resource use. She has a unique ability to communicate the stories, ideas and wisdom of the Anishinaabe people in ways that are both timely and relevant.

END_OF_DOCUMENT_TOKEN_TO_BE_REPLACED

The Schumacher Centre for a New Economics is seeking a Development and Communications Director to join their non-profit organisation in Western Massachusetts, to further the transition to a new economy. The centre’s mission is to educate the public about an economy that supports both people and the planet.  They believe that a fair and sustainable economy is possible and that citizens working for the common interest can build systems to achieve it. Much of the work of the Schumacher centre is in the area of sustainable local agriculture, land access, land trust with an ever present focus on communities and the commons.

END_OF_DOCUMENT_TOKEN_TO_BE_REPLACED

How many times are you asked at the market (or anytime really) why people ought to support local, organic producers? Surely it happens often enough that you’ve got your own rote lines memorized.

As consumers are increasingly questioning the economic chain that makes up the production of things, from food to garments, we’re reminded that this is not a new concern. In fact, it was at the core of the Indian Independence movement that saw India free itself from Colonial Britain.

Ghandi’s observation of how small economic acts could be incredibly empowering and the need for local economies were well documented by his close associate J. C. Kumarappa. In his work Why the Village Movement Kumaarappa writes:

“If the raw materials for making cocoa are obtained from plantations on the West coast of Africa which use some form of forced native labour, are carried by vessels on sea routes monopolised or controlled by violence, manufactured in England with sweated labor and brought to India under favourable customs duties enforced by political power, then a buyer of a tin of cocoa patronises the forced labour conditions in the West coast of Africa, utilizes the navy and so partakes in violence, gains by the low wages or bad conditions of workers in England and takes advantage of the political subjection of India. All this responsibility and more also is put into a little tin of cocoa.”

Austrian economist E.F Shumacher, who went on to write Small is Beautiful, drew a great deal of inspiration from the work of Kumarappa. Our friends over at the Schumacher Institute for a New Economics just let us know that J.C Kumarappa seminal book Economics of Permanence is available for free online thanks to some hardworking folks at the University of Maryland. 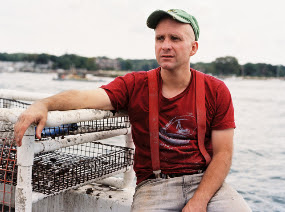 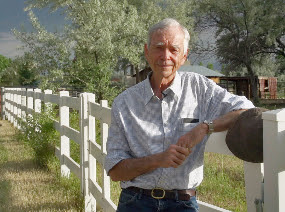 Please join us on Saturday, October 24th, in Churchtown, NY, to hear Allan Savory and Bren Smith speak in the extraordinary round barn of the Churchtown Dairy. The lecture program will begin at 10:00 am and conclude by 3:00 pm. Tours of the buildings, conducted by architect Rick Anderson, will begin at 9:00 am. Tickets include lunch and cost $100 each. Reserve your tickets through our website or by sending a check to the Schumacher Center for a New Economics at 140 Jug End Road, Great Barrington, MA 01230. More extensive biographies for each speaker are available below.

Allan Savory and Bren Smith tell stories of ecological redemption through a new approach to agriculture. Both have developed agricultural models based on natural systems. And both offer methods for farming that can fix carbon, clean our waters, and produce food more abundantly. Savory has developed a “holistic management” model to reverse desertification throughout the world’s vital grasslands, while Bren Smith cultivates kelp and shellfish using a model that he has dubbed “3-D ocean farming.”