The feminist farmers round these parts are pretty darn excited about these “I Look Like a Farmer” greeting cards. Inspired by photographs from the Female Farmer Project and designed by artist and author Anna Brones, processed from these cards go to support female farmers through Kiva and Women, Food and Agriculture Network.

This fabulous stationary is brought to you from the people behind Comestible Journal, a seasonal quarterly zine that describes itself as “Part food narrative, part food guide, part cookbook, this is a journal devoted to real food.”

You can learn more about the journal, peruse the online shop, and order the greetings cards here! 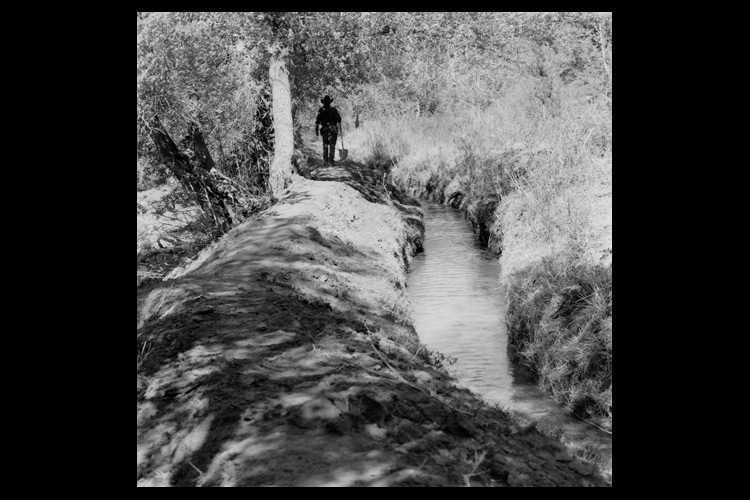 This April, as the communal irrigation ditches known as acequias run with spring melt and farmers carve new furrows into their fields, many northern New Mexico villages will celebrate their annual homecoming. This is the time of the limpia –– the cleaning of the acequia, when water-rights holders and their families gather to haul rocks, dig mud and clear brush, honoring a tradition so old that its followers can only guess at its roots. In some villages, the tradition has died out as young people move to cities in search of employment and the elderly pass on. But in El Cerrito, a small agrarian community on the Pecos River 60 miles southeast of Santa Fe, more people come home to attend the limpia every year.

El Cerrito has been photographer Sharon Stewart’s creative ground for two decades. Now based in Chacon, N.M., Stewart grew up among canals and pump houses in southern Texas. Her great-grandfather was a photographer, and her father a water district attorney. She earned a degree in economics at the University of Texas, and after an uninspired fling with business school, helped found the Houston Center for Photography. Her work has been featured in galleries across the United States and in Europe. To read more about the Acequia tradition in the high country news, click here!

While we’re on the subject of oil, this past Sunday, the New York Times magazine re-ran Sebastiao Salgado’s 1991 photo documentary of the burning of Saudi oil fields. And, holy crap, they are, without doubt or exaggeration, some of the most stunning photographs ever taken, highlighting both the unequivocal devastation of war and the abject threat posed by mere existence of oil fields.

In a new introduction to the photographs, Salgado writes in the Times, “It took billions of dollars and years of work to clean up the mess of Saddam Hussein’s failed scorched earth policy. Twenty-five years later, wars are raging in much of the Middle East, and oil fields have already been set aflame. We must remember that in the brutality of battle another such apocalypse is always just around the corner.”

During the last forty years, photographer Sebastião Salgado has been travelling through the continents, in the footsteps of an ever changing humanity. He has witnessed the major events of our recent history; international conflicts, famines, and exodus… He is now embarking on the discovery of pristine territories, of the wild fauna and flora, of grandiose landscapes: a huge photographic project which is a tribute to the planet’s beauty.
Sebastião’s Salgado’s life and work are revealed to us by his son, Juliano, who accompanied him during his most recent journeys, and by Wim Wenders, also a photographer.

Today, in incredibly awesome things made available by the internet, a new(ish) website  called Vintage Aerial provides access to over 5 million photos, taken in 41 states over the second half of the twentieth century.

Looking to find an aerial photograph of a specific farm, homestead, or rural township? The librarians at the site are nearly positive that they can find it for you, and for no cost! Prints of the photographs are then made available.

Just looking to browse the visual rural history of this country? Many of the prints are available to view online— many accompanied by stories from current or previous owners.

Oregon-based young farmer and photographer Nolan Caldish takes beautiful photographs, often pertaining to agricultural subjects. Several of the projects up on his website, both independent and commissioned feature vegetables, fruits, and land use issues. The three images above come the from “A Land Built By Gravity,” which explores America with stark realism, the intersection of the land and its people. Give it a peek!

Deadline on these is February 20th!  Here’s a great submission from Adam at Juniper Hill Farm:

images must be 300dpi resolution and mailed to almanac@thegreenhorns.net

Skye Chalmers is the photographer behind a new book, Sending Milk, which features images of the New England and New York farm families that make up the Cabot Creamery Cooperative. He writes about what he observed during this three-year project.

As I visited farms I found many similarities in how each farm was structured with its barns, parlor, feed bunkers, equipment and croplands, all of which result in sending milk. However, these are similarities in a generalized context. Each farm is composed of many thousands of details which express a wealth of individuality and a portrait unlike all other farms.

Details such as the way in which a fence is strung, whether the tractors are new John Deere(s) or layers of aged Internationals, whether the cows are Holstein or Jerseys, the flow of a parlor, the separation of duties between family members, how manure is managed, the layout of the heifer barns or bunkers. END_OF_DOCUMENT_TOKEN_TO_BE_REPLACED

Lucas is the lovey of Annie of the rooftop.

He takes pictures of wilderness buffs– especially buff ones with arrows and feathers and fern gully fierceness.
They came for a visit to the farm and we looked at the bullcalfs up on the hillside.