President Donald Trump has today endorsed legislation proposed by two republican senators (David Perdue of Georgia and Tom Cotton of Arkansas), which would introduce new limits on legal immigration. The new system would be based on merit over any other criteria, which means that highly skilled workers will receive priority over lower skilled workers or potential immigrants who have family members already residing within the United States. If passed, it would also reduce the number of refugees accepted by half, at a time when the world is facing the worst refugee crisis since WWII due to a complex combination of factors which include climate change and conflict.

END_OF_DOCUMENT_TOKEN_TO_BE_REPLACED

According to a recent article in the LA Times, wages are up for farm workers in California and some farms are even offering perks (think 401(k), health care, vacation days, and profit-sharing bonuses) that were often unheard of in the world of agriculture. So why, then, are farmers struggling with what sounds like a crippling labor shortage? Paired with an increasingly restrictive immigration policy, the article suggests that it’s because native-born Americans simply don’t want to work in the fields:

But the raises and new perks have not tempted native-born Americans to leave their day jobs for the fields. Nine in 10 agriculture workers in California are still foreign born, and more than half are undocumented, according to a federal survey.

What do you think? Although the article has its holes and shortcomings, it’s a great start to a debate that must be had in California and throughout the country. Give the entire piece a read by clicking HERE.

We don’t often see mainstream media outlets report on the often invisible farm workers that hold up so much of American agriculture– let alone do in depth and humanizing interviews with them. So, in case you missed it, we wanted to bring your attention to a series created by Dan Charles for NPR’s The Salt in which Charles interviews the largely-Hispanic migrant immigrant workers on sweet potato, apple, orange, strawberry, and blueberry farms. Even for those of us who have worked on smaller-scale farms, a look into the lives of workers on these gigantic combines is both fascinating and critical. We can’t recommend a listen more highly.

You can read Charles’s summary of his findings here and follow his links to listen to each piece individually.

The Hand That Feeds trailer from Robin Blotnick, a film on reforming the food system by organizing from the ground up for fair wages, fair working conditions, and collective bargaining rights. This is a rare story in which workers, with tenacity beyond imagination, are actually able to defeat the giant. It is also a good reminder that food justice work in the United Staes should be inherently intertwined with immigration reform.

On the one hand, it is great to see how far we’ve come. And on the other, it is pretty difficult to accept how far we haven’t. Pay close attention at 19:00 minutes to what one farm employer has to say about working conditions, wages, and his workers dispositions.

Watch the trailer for The Line from Kent Bassett on Vimeo. You can rent the film for the very affordable cost of $1.00.

Here’s some good evidence about how NAFTA undermines farmers, not only  domestically, but also in the countries where we ” free trade”

This article from The Nation focuses on pigs, who eat corn.

For nearly two decades, Smithfield has used NAFTA and the forces it unleashed to become the world’s largest packer and processor of hogs and pork. But the conditions in Veracruz that helped Smithfield make high profits plunged thousands of rural residents into poverty. Tens of thousands left Mexico, many eventually helping Smithfield’s bottom line once again by working for low wages on its US meatpacking lines. “The free trade agreement was the cause of our problems,” Ceja says.

Baja labor leaders learned tactics from their efforts in U.S. 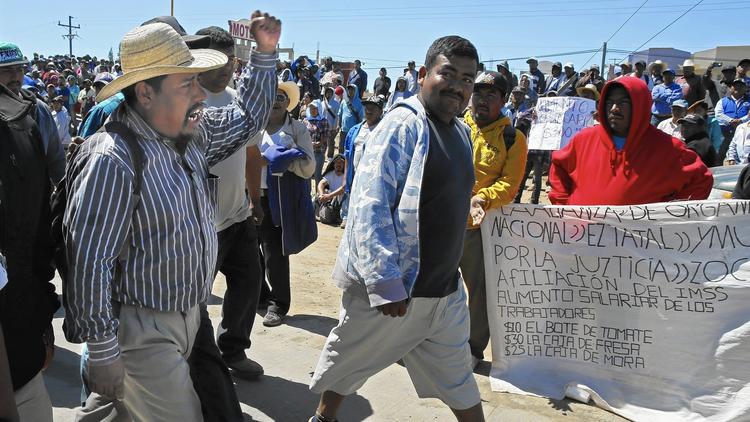 From the LA Times

Before Fidel Sanchez led protest marches this month against growers in Baja California, he fought for higher wages from tomato farmers in Florida.

Justino Herrera, who dons an Army fatigue jacket during labor talks, once led a work stoppage against an abusive labor contractor in Oregon.

Eloy Fernandez said he draws from his union organizing experience in California to keep angry protesters in San Quintin from resorting to violence.

“People get rowdy, but we don’t want that,” Fernandez, who helps run a makeshift camp of striking laborers outside a government building, said Thursday. “We just want to show our presence. To show the government that we are raising our voices. That’s how we did it over there.” Click HERE to read more!

Last month, the New York Times staff photographer Todd Heisler and a reporter, Damien Cave, set off on an ambitious journey to travel up Interstate 35, chronicling how the middle of America is being changed by immigration.

Check out their journey HERE!