The scorched road leading up to A-Z West, on the border of Joshua Tree National Park.
Credit: Stefan Ruiz and the NY Times

Journalist Kate Bolick recently wrote about her experience in visiting artist Andrea Zittel in the Californian desert. Zittel has spent the past 20 years of her career exploring solitude and this path has led her to create her “Experimental Living Cabins” at A-Z West near Joshua Tree National Park.

“Zittel sees herself as part of the 20th-century tradition of American artists leaving cities for the open spaces of the Southwest, but she is aware of her deviations. O’Keeffe and Martin chose the desert as a form of retreat, but Zittel saw it as liberation. As for the parallels often drawn between her and the largely male artists who came to make their massive, macho marks on the desert, she gently notes that she is not interested in “grand interventions,” only in finding meaning in intimate, everyday gestures.”

END_OF_DOCUMENT_TOKEN_TO_BE_REPLACED

We have recently discovered fourthland, a collaborative art and performance community in the UK which first emerged in 2008. It’s hard to do justice to fourthland and the work that they do in words. They create and explore objects, land, people and myths in interlinked creative and unconventional social and artistic ecosystems. The work that they do is concerned with feminine principles and alternative societies these principles permeate everything that they do.

END_OF_DOCUMENT_TOKEN_TO_BE_REPLACED

We should all be so lucky.

Are you a talented artist or designer looking to help a good cause and get exposure for your artistic endeavors? If the answer is YES, then send a sampling of your work to the wonderful folks at EcoFarm and it could be picked to promote their annual conference in Pacific Grove, CA:

Showcase your artistic vision through a unique design around the yet-to-be-announced theme of the 38th annual EcoFarm Conference. The selected artist will receive significant exposure, an honorarium, and help generate buzz for this iconic event.

Submit your portfolio to deborah@eco-farm.org by Saturday, April 1, 2017. EcoFarm will be in contact with selected artist by Wednesday, April 12. Completed artwork will be due in mid June, 2017.

If you’re unfamiliar with EcoFarm, you should get acquainted! You can learn more by clicking HERE, but this is an incredible organization with a long history of promoting an ecologically sustainable and just food and farming system, as well as putting together an inspiring farming conference each and every year.

Tales from Planet Earth, an environmental themed film fesitival, is looking for submissions to the upcoming 2017 event in Madison.

The theme for this years festival is ‘Land’! Does that resonate with you?

“Standing Rock. Idle No More. The Landless Worker’s Movement. Across the globe, land dispossession—both past and present—is bringing together new alliances and collective actions in the struggle for the rights and sovereignty of local peoples to determine their own futures. The 6th biennial Tales from Planet Earth will showcase stories that inform, challenge, and inspire audiences to rethink relationships to land in an era where greed, corruption, and resource demands are swallowing up ancestral and customary lands, severing cultural traditions rooted in the earth, and threatening the livelihoods, sovereignty, and self-determination of communities throughout the world.”

There’s more to Alan Kapuler than his inspirational work with seeds! The well-known organic seed breeder and co-founder of Seeds of Change is also an artist – learn about his philosophy and see his beautiful work and studio in the video above.

Signs of resistance – from bustle.com

The rally of people and movements contra the new President has been incredibly heartening. From the Women’s March, to the 100daysofresistance, we are seeing a powerful civic backlash that America has not witnessed for decades. For years people have conjured up Orwell’s 1984 and Animal Farm references when talking about the state and leaders that seem have little imagination when it comes to their tactics.

In keeping with that theme of stranger than fiction, one very interesting part of the recent protests is the art and posters that we’re seeing are drawing heavily from literature that foretells eerily similar worlds. At The Woman’s March on Washington there were hundreds of signs that nodded to Margaret Atwood’s The Handmaiden’s Tale, the amazing feminist take on dystopia. END_OF_DOCUMENT_TOKEN_TO_BE_REPLACED

“Brushes, Planets, Misfits and Other Collections” 2014 by Jeffrey Jenkins

Here’s something for all you artists, makers, communitarians, diggers (re:archaelogists) and generally strange people: Midlred’s Lane.

Residing on a site named for the homesteader that inhabited the space in the 20th century, a collection of individuals are experimenting with different ways of living/being/working/art making/formulating simply complex sentences. END_OF_DOCUMENT_TOKEN_TO_BE_REPLACED

Today might have us thinking a little obsessively about some big level tsoris.

But let’s take a moment to reflect on some of the reasons why we choose to get into farming in the first place. Speaking personally, I decided to farm because I felt it was a very concrete way to have some sort of impact on the troubles I perceived in the world. Disillusioned with politics, education and these broad means of change I saw farming as personal direct action.

Through the repetitive act of farming I slowly stopped seeing it as a political statement, and with each year that past, each additional scar on my hand and wrinkle on my face, I began to see the world through the lens of agriculture. I began to see the connections it makes – how good stewardship of land can bring a community together, that it’s about a lot more than vegetables and cows and endless hours- because through this daily act we begin to see ourselves in relation to all of these things.  END_OF_DOCUMENT_TOKEN_TO_BE_REPLACED

Praise be to Fedco Seeds of this epically badass farm superhero! In case you missed it, this is the cover of their 2017 seed catalogue. “Trowel and weeder in hand, Magic Molly roams the cosmos rooting out corporate tyranny and planting the seeds of freedom.” 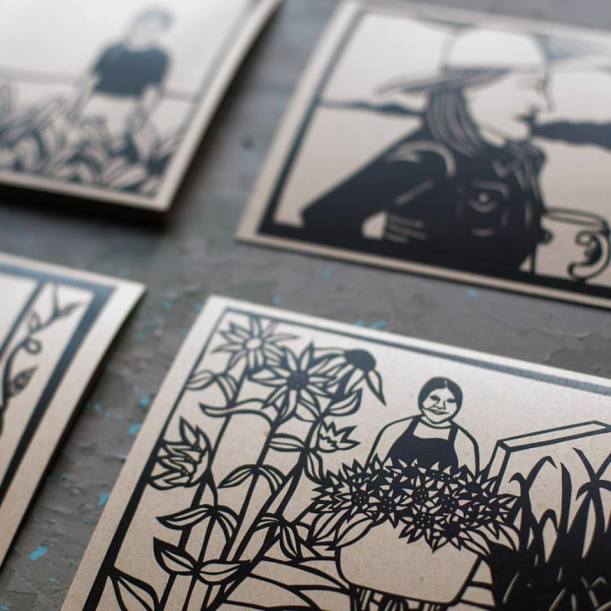 The feminist farmers round these parts are pretty darn excited about these “I Look Like a Farmer” greeting cards. Inspired by photographs from the Female Farmer Project and designed by artist and author Anna Brones, processed from these cards go to support female farmers through Kiva and Women, Food and Agriculture Network.

This fabulous stationary is brought to you from the people behind Comestible Journal, a seasonal quarterly zine that describes itself as “Part food narrative, part food guide, part cookbook, this is a journal devoted to real food.”

You can learn more about the journal, peruse the online shop, and order the greetings cards here!

It’s that time of year.

The gifts are torn apart,the wrapping paper lays warm next to the dying tree, boots are on, and people are piling into cars, lining up at shops, trampling and fighting for deals, deals, deals!

We’re doing a little internal shopping. Check out the buy nothing catalogue, a list of things you already have and can appreciate free of cost.

Burn Zone, is Danny Lyon’s newest published work. Burn Zone is a Cri de Coeur directed at the artist community and our youth asking them to join the fight to save planet Earth. In it, photographer and filmmaker Danny Lyon, tells the story of his return to New Mexico after thirty years and the dramatic changes caused there by the use of fossil fuels. END_OF_DOCUMENT_TOKEN_TO_BE_REPLACED

Seed Journey — a project from the artist group Future Farmers— is a seafaring voyage connected to a public art project. “Seed Journey moves people, ideas and seeds through time and space. This voyage—its crew and cargo—are agents that link the commons as they relate to local networks and a more global complex of seed savers and stewards of the land, air and water. A rotating crew of artists, anthropologists, biologists, bakers, activists, sailors and farmers join the journey and share their findings at host institutions along the route from small harbors to large ports from barns to museums (contemporary art, natrual history and maritime) to social centers.”

LAM 360° (Land Art Mongolia | acronym LAM) is a biennial art festival located in Mongolia. LAM focuses on Land Art as a form of spatial visualization of the relations between nature, culture and social policies. It strongly promotes freedom of expression in joining people and institutions from all sectors of Mongolian society by meshing their respective backgrounds and perspectives through collaboration and networking actions of regional and global scope.

This past festival took place in Southeast Gobi and was called Catching the Axis –in between the sky and the earth. Check out the website to be inspired about ways to make informative and moving LAND ART.